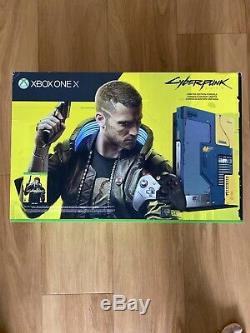 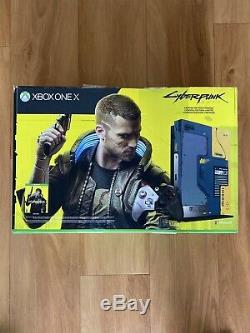 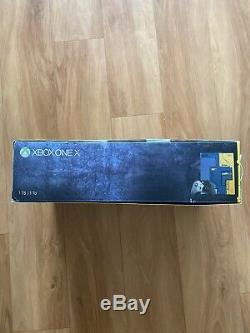 This Console is Brand new and currently listed on B&H as DISCONTINUED! Get your collectors item here now! Experience a true 4K and HDR gaming experience with the. Microsoft Xbox One X Cyberpunk 2077 Limited Edition Bundle.

With 6 teraflops of graphical power and 12GB of GDDR5 VRAM, the Xbox One X can play games with native 4K resolution running at up to 60 frames per second (fps). It also supports AMD FreeSync, when paired with a compatible monitor, which reduces screen tearing.

The Xbox One X features an HDMI 1.4b input and an HDMI 2.0b output. It also has three USB 3.0 ports as well as an IR out port. For audio, the Xbox One X has a S/PDIF output that supports DTS 5.1, Dolby Digital 5.1, and Dolby TrueHD with Atmos.

Go online via wired Ethernet LAN or wireless dual-band Wi-Fi. Sign up for an Xbox Live Gold membership in order to play online multiplayer. This bundle comes with a digital copy of Cyberpunk 2077. Blood and Gore Intense Violence Nudity Strong Language Strong Sexual Content Use of Drugs and Alcohol.

An Xbox Live Gold subscription is required for access to online multiplayer features. Cyberpunk 2077 is an open-world, action-adventure story set in Night City, a megalopolis obsessed with power, glamour, and body modification. You play as V, a mercenary outlaw going after a one-of-a-kind implant that is the key to immortality. You can customize your character's cyberware, skill set, and play style, and explore a vast city where the choices you make shape the story and world around you.

The Xbox One X delivers a true 4K gaming experience with 2160p frame buffers and 6 teraflops of graphical power. Experience richer, more luminous colors in games. With a higher contrast ratio, High Dynamic Range technology brings out the true visual depth of your games. Dolby Atmos and DTS:X enables you to experience premiere audio that puts you in the center of 3D spatial sound. The 8-core custom AMD CPU is clocked at 2.3 GHz to bring enhanced AI, real world detail, and smoother interactions to your gaming experience.

12GB of graphics memory add speed and power to the game's performance, enabling bigger worlds, further horizons, and quicker load times. A 6-teraflop GPU with 326 GB/s of memory bandwidth enables 4K environments and characters to become more realistic, thanks to more detail and smoother animations. A 40% increase in power doesn't mean an increase in size.

In fact, the Xbox One X is the smallest Xbox yet. All that power doesn't mean more heat and noise. The Xbox One X uses advanced liquid cooling and the supercharger-style centrifugal fan to ensure it stays cool. The item "Microsoft Xbox One X Cyberpunk 2077 Special Edition Console Free Shipping" is in sale since Thursday, July 23, 2020. This item is in the category "Video Games & Consoles\Video Game Consoles".